Originally published in The Chronicles Magazine, Winter 2009.
By Laura Selenzi
In working with Arabesque Dance Company one of the most valuable learning experiences for me has been that of working with live musicians. The Arabesque Orchestra is without contention the best of it's kind in Ontario and it has been invaluable to work alongside them.

My first introduction was at the Arabesque Pro Course in 2005, where we met lead drummer Sulieman Warwar and Quanoun (among other things) maestro Dr. George Sawa. These master musicians patiently taught us the subtleties of dancing to improvised music. Sulieman taught us the cues for entering and ending a show, and the basic pattern of a drum solo. We would eventually learn that not all drummers have the same methods for communicating with dancers (or any methods, for that matter) and we discovered that we are very lucky to have someone so tuned into the dancer and to creating a harmonious communication between musician and dancer, albeit a bit of a maniac on the drum! George taught us about the Arabic maquams and introduced us to the stunning complexity of the quanoun. At the culmination of the course we performed for an audience with these musicians, which was terrifying and exhilarating for all of us. 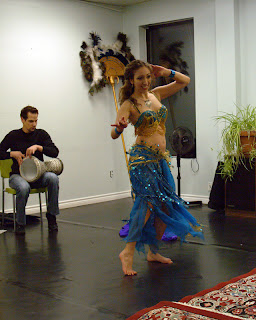 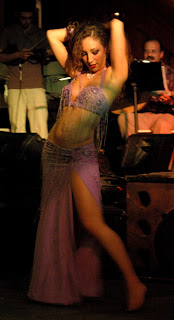 I experienced the orchestra for the first time at the weekly nightclub show Arabesque hosts, Layali Arabesque. I had never heard a full live Arabic band before and instantly found the drums exciting and infectious and Bassam Bishara's voice and Oud heartbreakingly beautiful. When I was the featured dancer at Layali, (an opportunity I did not feel ready for in the least!) I was calmed by the band's encouraging smiles and words of wisdom and felt honored at the music they played for me. I still had a lot to learn about dancing to live music, but this was a good start.
Since this first time I have danced at Layali many times over the past couple years. This night has now moved to the larger Myth Restaurant, and new musicians have joined the Orchestra both temporarily and on a regular basis. On an average night we are treated to keyboard, 4 drummers (riqq, bongos or sumbati, doumbek and daff) Violin, Oud and Bassam's lovely voice. We have on occasion had tabla, tahvol (large double-sided drum played with a stick, generally to accompany Saidi style dance), additional violinists, guest vocalists and more. 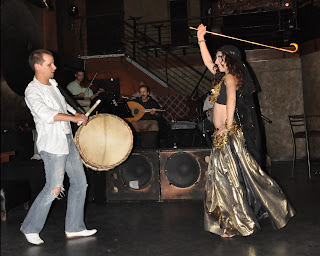 Arabesque dancers are experienced in the different instruments, rhythms and styles of music that tend to accompany certain folkloric styles of dance such as Khaleegy, Saidi, Shamadan and more. On any given night at Layali, the band may start a beat from the Gulf, and the crowd will cry out in delight and start to swing their hair, accent with their shoulders and wave their hands to the beat in the appropriate style used in Khaleegy dance. This instant recognition of an Arabic rhythm isn't exactly common among westerners, and I'm sure it really throws the rest of the audience for a loop! You can also catch this phenomenon with a good Debke line or any Oum Kalthoum song; sending wistful Arabs into passionate gesticulation and swaying, and maybe a bellydancer or 20 to let the music take her away. 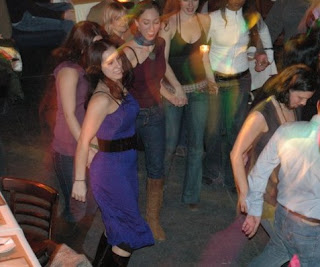 I currently take Sulieman's doumbek class at Arabesque, and although I'm barely a beginner, I was excited to show a drummer in my hometown a couple tips on his doumbek, and from my experience at Layali I was able to guide him into accompanying me in a recent show, a sight which my East Coast town is not usually treated too!
I certainly have gained immensely from my experience with the musicians at Arabesque, and I truly wish that other dancers could experience the same. Because music is so tightly wound into our dancing, I believe this connection to live musicians is vital, and intrinsic to keeping some sense of history and tradition in our dance as we move forward in the history of bellydance.